There have been many changes since Mitsuyo Maeda first introduced the grappling-based Japanese Jiu Jitsu to the western hemisphere in the 1920s. Increasing positional control over a resisting opponent en route to submitting them with joint locks and strangles, Brazilian Jiu Jitsu (BJJ) was brought into mainstream North American culture in the early 90’s by the Gracie Family. BJJ has established itself as a necessary tool for any well rounded martial artist. In practice, BJJ adapts to fit the parameters of self-defense, competition, and ultimately true self-expression for all practitioners.

At Renzo Gracie Academy Des Moines we dedicate ourselves to becoming well-rounded grapplers in all aspects of the discipline. Classes are taught with a “feet-to-floor,” mentality. This means students will be instructed on the proper, safe application of takedowns, positional control, and submissions. Combining technical knowledge from Jiu Jitsu, Wrestling, and Judo, RGADSM strives to introduce to its students a diverse array of grappling techniques in both Gi and No-Gi. 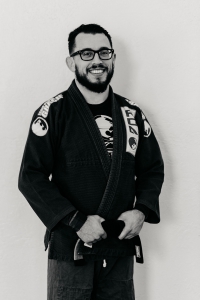 With 20 years of grappling experience, Carsten has developed a unique style and method of practicing and teaching Jiu Jitsu. Starting his grappling journey on High School wrestling mats in Wisconsin, Carsten pursued that sport through college where he was a four-year letter winner at the University of Wisconsin-Platteville. After moving to Portland, OR in 2011, Carsten began training Jiu Jitsu.

In 2013 he began training with Renzo Gracie/John Danaher black belt Aaron Milam. Under the Renzo Gracie Portland banner, Carsten succeeded in becoming one of the Pacific Northwest’s premier grapplers. He successfully competed at the national and international level in multiple tournaments and events, winning on Submission Underground, and placing 3rd at the ADCC East Coast trials. In March 2018, Carsten earned his black belt in Brazilian Jiu Jitsu from Aaron.

Carsten has also coached and cornered fighters at the professional and amateur levels.

In addition, he holds a B.A. in Psychology and a B.A. in Criminal Justice.

Some of our Jiu Jitsu memories.
We would love to add yours too…

Maps were disabled by the visitor on this site. Click to open the map in a new window.